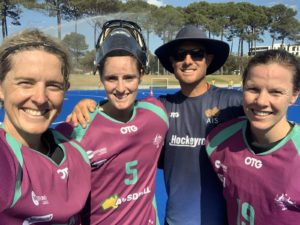 Give us a brief history of your playing and coaching career?

After finishing school, I joined the hockey club down the road where the South African goalkeeper at the time (Wayne Phillips) was playing. I started in the 6th team that year and ended up playing a game for every team in the men’s section. I just loved playing hockey as a youngster, especially training. In fact, I used to roll up to Queensmead and just train with anyone who needed a keeper which was quite often the South African national players who would be preparing for a series or camp. They of course loved having a target to aim at and I was happy being their cannon fodder. I think the struggle of playing in a lower team really shaped my career, it made me hungrier to succeed.

Moving on, SA u21 in 96 and 97, the South African team from 2001 to 2005 and then a heap of club hockey overseas which included stints in Germany, Ireland, Northern Ireland and England. A few highlights of my career would be playing at the Athens Olympics, the World Cup in Kuala Lumpur and the Commonwealth Games in Manchester.

As an 18 year old, I had a choice of working as a waiter or a sports coach at Clifton Prep School. I guess the decision was pretty easy and this was the start of my coaching career which worked hand in hand with goalkeeping. If I wasn’t playing, I was coaching.

In 2009, the South African head coach at the time (and former team mate) Gregg Clark invited me to join the South African team as the goalkeeper coach who I worked with until the end of the London Olympics. After the Games, I joined the Ranchi Rhinos (for two years before moving to the UP Wizards) in the Hockey India League and soon after this my first stint with Hockey India started. I worked with Hockey India on and off over a period of four years ending in December 2016, just before I immigrated to Australia. I started with the Roos and Kookas in February 2017.

I really enjoyed my time with India. I love the country, the food and especially the people. I also had a chance to work with some fabulous coaches and goalkeepers during my tenure there. The work varied from coaching the Indian national team keepers to hosting junior clinics sometimes with over 35 goalkeepers under my tuition which of course was a good challenge at the time. It’s good to see some of the youngsters I coached back then (like Krishan Pathak and Suraj Karkera) doing well on the international stage now which is really good for Indian hockey as the national team has in the past, struggled a bit with depth in their goalkeeping department. Something I like about working with the Indians is their willingness to learn which makes coaching really easy, fun and rewarding.

3. What inspired the move to Australia and what challenges have you and your family faced?

I think the best way to answer this is to say ‘ different opportunities’ brought us to Straya. We had a wonderful life in South Africa and of course have a very close connection to the country. I have most of my family in Durban and many friends spread throughout Mzansi but consider myself an Aussie now although still very much a Bok rugby fan.

Immigration is what you make of it. Most importantly, we embraced Australian culture from the day we landed and really sunk our teeth into Aussie sport. I coached hockey and both my boys played cricket and AFL which meant our network really expanded quickly.

Of course, living so far away from family and friends is the hardest part but the world is a much smaller place now and I literally speak to my mom every day, even if it’s just a quick ‘hello’ over Facetime.

We are very well settled in Perth, have a home which we are renovating, a dog called Bailey which we all love very much but still enjoy our biltong, boerewors and koeksisters in fact, we even have a Roos and Kookas Biltong Club where I source some of Perth’s finest biltog for a group of players and staff. 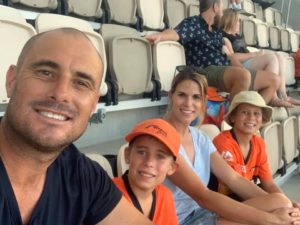 4. Have their been any big learnings for you now coaching the Aussie men’s and women’s goalies.

Yes for sure, the biggest thing I learnt early on (and I am immensely grateful to Fitzy our Kookas culture coach for this) is to take on a ‘collaborative coaching’ approach with the six keepers in our high performance program, something more along the lines of working together in shaping their own personal development as opposed to my ‘this is the way we do it’ style, which worked in other high performance environments. Also, a ‘Steve Smith batting’ approach. What I mean by this, is that the way that Rachael Lynch keeps, doesn’t necessarily have to be the same way that Ash Wells keeps, what works really well for Lynchy may not work for Ash and vice versa. Of course, the goalkeeping fundamentals are the same, but it’s okay to be different. 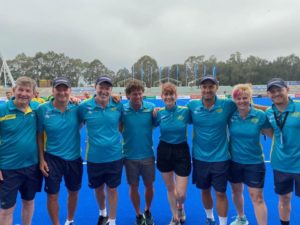 5. What’s the main philosophy that guides your coaching?

In my opinion, the three most important principles of coaching are to ensure that you educate your players, challenge your players and most importantly that they enjoy the sport. Of course there are sessions where I do little or no teaching where we work more on engraining techniques. Goalie town (as we call it in the HP program) can be a pretty boring and lonely place so I always like to ensure that there is a fun element in my sessions. I also happen to be pretty passionate and enthusiastic about goalkeeping so if you around PHS, you may hear a super dodgy accent celebrating a few good saves. 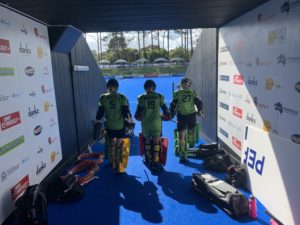